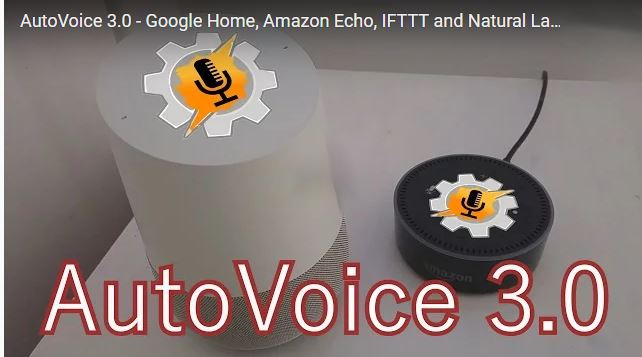 In the video here you will see, how Google Home and Alexa interact together by using predefined commands but also the natural language feature. Regardless if you say “hello”, “hi” or “howdy” it will be mapped to the hello action. You can also integrate variables for users in terms of names, which will be carried throughout the conversation or if you don’t include a name, AutoVoice will prompt you for that.

Given that I already have Tasker, AutoVera, AutoHue, AutoRemote and I did purchase AutoVoice Pro 2.0 back then and I received the upgrade to AutoVoice 3.0 as part of that purchase, I am going to test this new functionality with Home automation hubs. Vera was already supported with AutoVera as I demonstrated with the Doorbell posting including reporting the status of a Z-wave device through Tasker and AutoVera.

Now it is time to validate Homeseer with Alexa and see, if the AutoVoice will work in conjunction with Homeseer skill on Alexa. There are two Homeseer skills. One skill with saying “Alexa, ask Homeseer to…” and the second one simply saying “Alexa, turn on …”. In this case I will have to say “Alexa, ask AutoVoice to …”. In theory this should work well, but if Homeseer was able to integrate a second skill without having the need to call out “Homeseer” then AutoVoice should accomplish the same. That would be a great feature to have, but I will not start judging here until I actually tested it.

In the meantime enjoy the small video having Google Home and Alexa talking to each other. Pretty fun!

In January 2016 I posted in my posting about How to create a video Intercom using Tablets in combination with Android. Here we are almost 1.5 years later and one app from the Tasker family called AutoVoice received a major upgrade.

The 2.0 version of AutoVoice used Google Now integration to recognize your voice and trigger certain events on your phone or on your smart hub e.g. Vera by using the other Tasker app called AutoVera. You had to program every command to match your Vera device names and the configuration of Tasker was not the easiest interface.

With the new version 3.0 released this March 2017 AutoVoice now supports Google Home and Alexa. On top of that you can now optionally subscribe to the usage of natural language, which is accomplish using Machine learning integration API.ai.

API.ai is a Rest-ful API subscription service supporting a variety of products including Google Home, Alexa, Cortana, Skype, etc. AutoVoice charges $0.99/month for the natural language feature, which is really a personal preference. If you like to be able to use different words and not have to worry about how you say certain things, then you should go for the natural language integration.